On May 22, 1999, Detective Lynn Hicks voluntarily responded to a domestic in progress. As he exited his car and approached the apartment building, he was shot and killed by a second subject hiding in a parked car near the entrance of the building.In the long history of the Goodlettsville Police Department, this was our first officer killed in the line of duty. Det. Lynn Hicks is honored for his ultimate sacrifice with a memorial on the ground of City Hall.

The Police Department holds a memorial ceremony every year on the anniversary of his heroic service for our City. His name is also inscribed on the National Police Memorial in Washington, D.C.

On June 6, 1996, Officer Donnie Holt was off duty, training for the Police Olympics at the Metro Nashville Training Academy, and suffered a fatal heart attack. He left a host of stunned family and friends when he died. Off. Holt was a gentle giant of a man who could bring peace to troubled situations and give a smile to hearts that were broken with his soft hug or a sympathetic pat on the back.

He was loved by children and young people everywhere that he went. He was a great protector of the small and of the less fortunate in society. His dedication to serve this community could be seen on the hottest of days, when he would stop to help someone change a tire or give them a ride to get a can of gas. His calm, professional attitude during his almost 10 year of service will never cease to inspire us all.

On August 2, 1990, Corporal Larry Boswell and his wife were taking an evening pleasure ride on his motorcycle, when a car pulling out of a gas station hit them. Although his wife survived, after she endured a lengthy recovery process, Cpl. Boswell did not. Many from that time believe that Cpl. Boswell was the heart and soul of our Department, and that when he was killed, a part of us died with him.

Many of us are still mourning his loss years later. His humor and practical jokes are legendary among police agencies all over Middle Tennessee. His quick smile and funny stories touched the lives of countless people and families during his nearly 10 years of service to the citizens of Goodlettsville. His legend will live on in our hearts every time we remember those special moments in which he touched our lives.

The week of May 12th is designated as Police Memorial Week, by Presidential Proclamation. There was a Police Memorial Service in Massey Auditorium, May 22, at 10:00 am where law enforcement officers and citizens gathered to pay their respects; to honor the officers who have died in the line of duty. Detective Lynn Hicks was honored during the service. 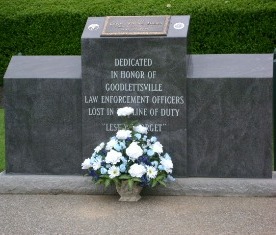 Lynn Hicks will never be lost in the pages of law enforcement history..
Lynn Hicks will always be remembered as a good son, brother, father, friend, and police officer who saved several lives on May 22, 1999.